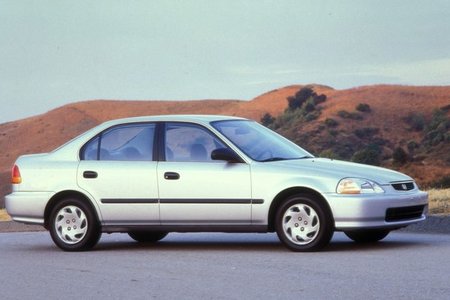 Though it trailed the Toyota Corolla on a few occasions this past year, the Civic is set to take the top spot for its 24th consecutive year
During a month in which the supply-constrained Canadian auto industry suffered a sales decline of roughly 14 per cent, Honda’s new 11th-generation Civic delivered a major improvement.

Despite decreases at nearly every brand that still reports monthly figures (Toyota, Mazda, Subaru, Kia, Lexus, Acura, and Honda), the Civic’s 9-per cent year-over-year increase and 3,653 sales was enough for Honda to secure a key victory. At 40,336 Civics through 2021’s first 11 months, the Honda now stands 1,827 units clear of the second-ranked Toyota Corolla.

Barring either an improbable lockdown of Honda dealers or an implausible 100-per cent increase in Corolla sales, 2021 will be the Honda Civic’s 24th consecutive year as Canada’s best-selling car.

Though not a surprise given the nameplate’s illustrious 23-year reign, a chaotic 2021 was rife with challenges for the Alliston, Ontario-built Civic. Accustomed to routine monthly triumphs, the Civic trailed the Corolla on four occasions in 2021: March, May, August, and September.

Yet as in times past, Honda Canada found a way to execute a high-volume Q4.

When challenged closely by the Mazda 3 for much of 2010, the Civic showcased its dominance with a 14,705-unit fourth-quarter, outselling the Mazda 3 by more than 2-to-1 to end the year.

By 2013, the Hyundai Elantra was entrenched as the Honda Civic’s main threat. But after the Elantra outsold the Civic in four of 2013’s first five months, Honda used the fourth-quarter to blow the Hyundai out of the water with a 53-per cent spread in the final three months of the year.

When it comes to the Civic, it appears as though Honda Canada does not like to lose.

After growing remarkably accustomed to wearing the crown, can you even blame Honda for being so laser-focused on Civic leadership? The Civic began its tenure as Canada’s car leader in 1998. Tariffs on softwood lumber were the talk of the town, Google was only just beginning, big banks were attempting to merge, and Canada’s top F1 driver, Lance Stroll, was born in Montreal. The Civic, meanwhile, was three years into its sixth iteration and a decade into its term as a Canadian-built vehicle. Another decade later, in 2008, Honda Canada reported the Civic’s all-time sales record: 72,463 units. It was enough to make the Civic not only Canada’s top car, but also Canada’s top vehicle overall, a feat not accomplished since.

With the decline of Canada’s passenger car market — and the globe’s, for that matter — came a decline in Civic sales, as well. Far from that 72,463-unit record pace, Honda is on track for fewer than 45,000 Civic sales in 2021. Yet the Civic’s share of that market, a small market to be sure but a meaningful one nevertheless, stood at 13 per cent through the first three-quarters of the year, up nearly five points compared with its share during that record year of 2008. The Civic’s light may be dimming, but it’s dimming during an era in which many of its competitors are entirely snuffed out.

The world’s rate of change over the last quarter-century is unparalleled in human history. The Civic has gone through its fair share of evolution during that time period, as well. It’s bigger, faster, stronger, safer, and better-equipped than ever before. Yet adjusted for inflation, the $24,465 2022 Honda Civic is actually ever-so-slightly less expensive than the 1998 model. That’s before even factoring in the extra features, the safety technology, and the engines that produce more power while consuming less fuel.

It’s that kind of a value quotient that makes us think the Civic’s odds of repeating for a 25th consecutive year are definitely in Honda’s favour.